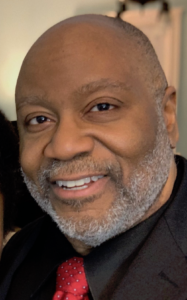 Rocklyn was born in New York City and grew up in a loving and nurturing extended family environment. He developed a deep interest in science and mathematics as an elementary school student which led him to The Bronx High School of Science, then one of three math and science oriented exam schools in the New York City public school system. While at Bronx Science, Rocklyn participated in the Columbia University Science Honors Program and attended the Hampshire College Summer Studies in Math (HCSSiM), a program his friends sometimes refer to as “math camp”. After graduating in 1976, Rocklyn left New York to attend the Massachusetts Institute of Technology (MIT) in Cambridge, Massachusetts where he would major in physics.

MIT was the setting for a number of formative experiences in Rocklyn’s life. In the summer of 1977 he served as a tutor in Project Interphase, a preparatory program for selected incoming students. It was here that he met Eva Louise Gilliam, an incoming freshman and the woman who would eventually become his wife. In 1978 Rocklyn’s growing involvement in minority student activities culminated in his election to the office of Co-Chairman of the MIT Black Student Union. It was this position that gave him the opportunity to begin developing his leadership skills and to work with students, faculty, and senior members of the administration.

His greatest MIT experience was yet to come however. Although he did not “grow up in church”,  Rocklyn did have some scattered experiences with Christianity prior to college. He attended Sunday School briefly as a small child and later attended Trinity Parish Boys Camp for several summers as a teenager. His maternal grandmother also spoke often about God’s role in her own life. All of these created in him a basic awareness of spiritual issues, but left him without a solid understanding of the implications of Jesus’ death burial and resurrection.

While he was in high school, his sister Renée took the time to write him a letter explaining the good news about Jesus and how to make him Lord of your life. Although at the time he rejected her invitation to accept Jesus (he threw the letter away), the message in her letter never left him. During his freshman year in college, Rocklyn met Michael Harrison, a fellow physics student who became his closest friend and one of the major Christian influences on his life. The following summer he met Eva Gilliam (the love of his life) and B. Courtney McBath, both incoming freshman. Courtney became another very powerful Christian influence in both Rocklyn’s and Eva’s lives. Courtney is now the Bishop and Senior Pastor of Calvary Revival Church in Norfolk, Virginia.

In the spring of 1979 (his junior year), while sitting alone in his dormitory room, Rocklyn had an encounter with the Holy Spirit and gave his life to Jesus Christ. Somehow the Jesus who suffered the horrors of crucifixion roughly 2000 years ago and then rose from the dead 3 days later made his presence known to him and made it clear that he now had an opportunity to follow Jesus. The Jesus he now follows is the same Jesus who has been given all authority in heaven and earth (Matthew 28:18-20) and who will ultimately judge and rule over all creation (Acts 17:29-31).

Rocklyn immediately became an active member of the MIT Black Christian Fellowship. Shortly thereafter he attended Easter service at the First Church of God in the South End section of Boston. Here he was introduced to the ministry of Dr. Gideon A. Thompson Sr. — the man who would become his mentor and spiritual father.

In 1980 Rocklyn married Eva. In 1981, their son, Rocklyn Jr. was born. When Pastors Gilbert and Yvonne Thompson left First Church of God to found New Covenant Christian Center (now Jubilee Christian Church) in 1982, Rocklyn, Eva, and several others joined them as charter members of the new ministry. They were part of the first group of New Covenant cell leaders. Rocklyn graduated from MIT in 1983 with an S.B. in Physics and continued working there in the Information Systems Department. In 1985, he and Eva welcomed their daughter Sharon into the world.

In 1987 Rocklyn and his family left New Covenant to join another ministry. Although this ultimately proved to be a mistake, he and Eva did form several friendships there that continue to be a blessing to them. In 1994, prompted by God, they returned to New Covenant.

By this time New Covenant had renewed its vision for cell ministry and Rocklyn seized this opportunity to pursue his pastoral calling. He became a cell leader again and was soon asked to serve as a section leader overseeing several cell leaders. At this time he also became very active in coordinating the church’s overall cell ministry. In 1999, Rocklyn and his wife were appointed as Pastors over one of the four cell ministry districts; he eventually authored a number of the materials that were used by the cell ministry participants.

In May 2002 Rocklyn left his position as a Senior Project Manager at MIT to serve as Administrative Pastor at New Covenant. This position gave him the opportunity to further develop New Covenant’s infrastructure and to learn important lessons about church organization. It was during this period of his life that God began to rekindle in him the dream of founding a new ministry — Life Church. Life Church would continue many of the spiritual traditions of New Covenant, but would be launched as a cell church from the very beginning.

On Sunday October 26, 2003 Bishop Thompson and the pastoral staff of New Covenant laid hands on Rocklyn and Eva to commission them in the launching of Life Church.

Rocklyn and Eva have one son, one daughter, and five grandchildren.